We worked with the team at Ark Priory Academy in London to add a range of playground markings specified by the architects of the newly completed school in Acton. The markings were such a hit with the children we were asked back not long after to install some more playground games!

Our team installed a number of playground games and sports court markings as suggested in the architects original designs. However once the children began to use the playground the designs were such a success that Headteacher Jacqueline Steele saw an opportunity, there was still plenty of bare tarmac so adding some more playground games would benefit the children both educationally and physically.

The team from first4playgrounds returned to London and install a number of additional playground markings into the bare tarmac areas including an Activity Trail, 1-20 Alphabet Snake, 1-10 Dinosaur and an Alphabet Spiral.

Once the project was complete the team at Ark Priory Primary were really pleased with the additional playground games as well as the prompt and efficient installation work carried out by first4playgrounds. The school’s caretaker was so impressed he told our team that he’d already contacted a number of his colleagues in neighboring schools recommending first4playgrounds for playground markings. 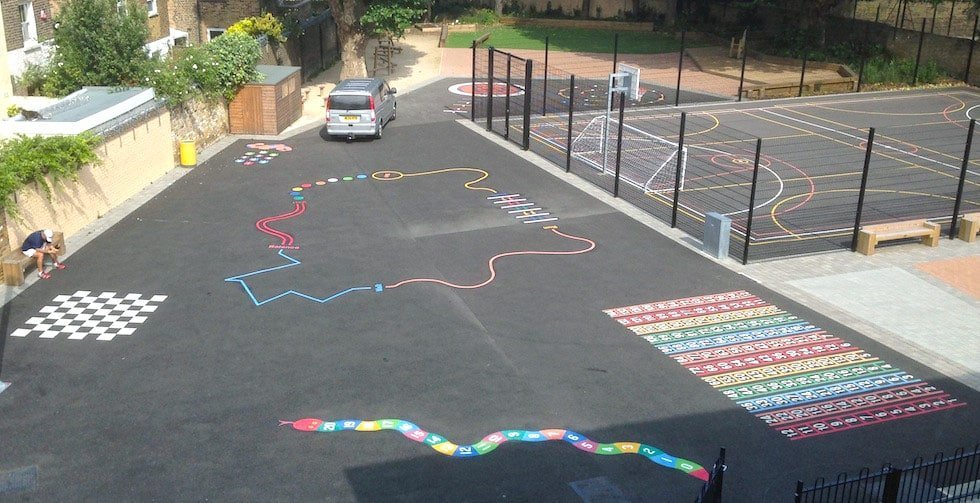 The children have been so pleased with markings. I looked on the CCTV camera and could see them playing on them all day. Thank you very much.

Thank you very much. The service you provided was excellent. You were very adaptable to the timings of our school day and our needs. What is excellent is that the markings were tailored to suit our needs. We adapted the brochure ideas and nothing was a problem. I can’t wait for phase two to begin. Thank you for a prompt service.

first4playgrounds were absolutely fantastic. They couldn’t have been any more professional in all aspects of their work, they go straight to the top of our recommended contractors list.

We are extremely pleased with the service and outcome! The children were amazed to see your colourful designs and it has really breathed a new lease of life into a ‘tired’ playground.

The school logo is very impressive and is a really good visual point for all parents, children and visitors that come into the school.

The work was carried out to a high standard by pleasant and affable workmen. I would not hesitate to recommend first4playgrounds to schools and colleges. Thank you.

I just wanted to say a massive thank you for the work that has been completed at Stakeford Primary School. The customer service we have received has been outstanding from start to finish and the work has been done to a really high standard. The children love the new markings. We will certainly be using your company again, many thanks.

Thanks for the markings – they look great! We look forward to using your services again in the future.

We are very happy with the service we received from first4playgrounds, from the first point of contact through to the Alphabet Snail being installed and Invoice being received the communication was prompt and friendly. Highly Recommended!

Read more of our case studies…